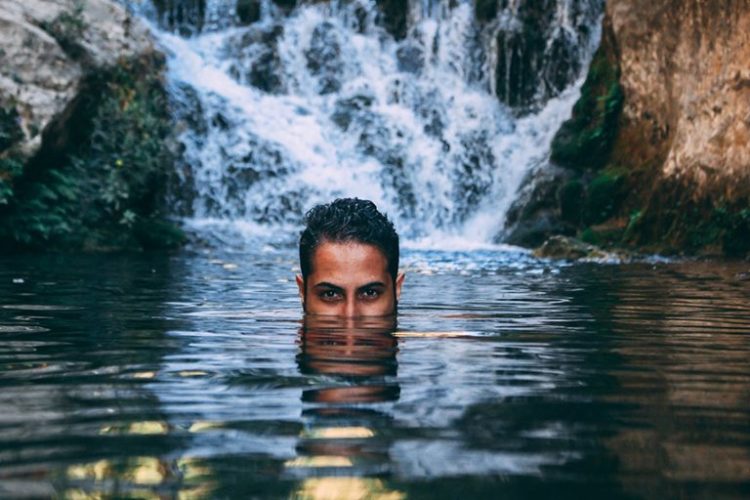 The Aquatic Colognes have been composed of a unique combination of aromatic Marine and woody bases. Eclectic is the best way to describe these new fragrances as they appeal to many customers.

As an Amazon Associate I earn commission from qualifying purchases through affiliate links from Amazon.com Inc. 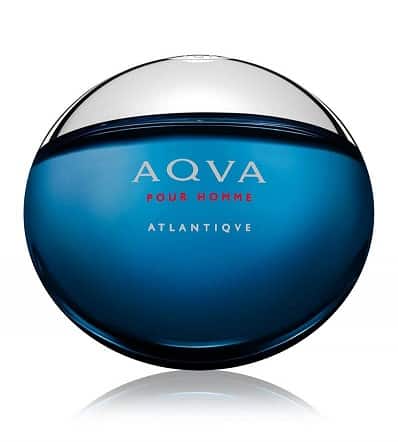 The scent of the Atlantic Ocean inspires Bvlgari Aqva Atlantiqve EDT. Due to its uniqueness has been a standout among the top men’s aquatic colognes since 2017.

The Bvlgari fragrance house was able to capture a near-perfect cologne blend with this scent. It manages to craft a more than the sensual trail that ties together freshness and masculinity.

This fragrance is primarily described as woody since it contains a sandalwood note. Bvlgari Aqva can adapt to any situation, as a fresh smelling fragrance. As one can notice, Atlantiqve comprises several elements. No scent is lost during the day or overpowered by the next.

The perfumer behind this fragrance, Jacques Cavallier, managed to emphasize each scent blend equally. Aqva Atlantiqve has remarkable longevity of 9 to 10 hours. It is excellent for the warm days of spring and summer. Time to add this little wonder to your cologne collection and adopt it as your signature scent! 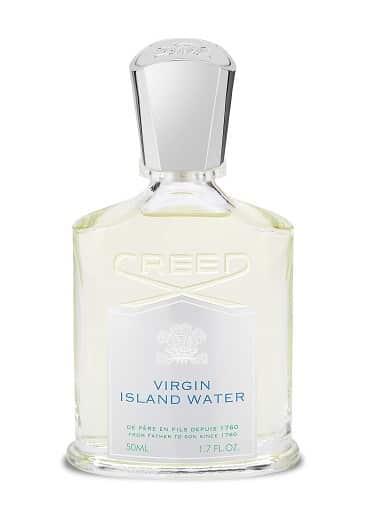 Creed Virgin Island Water is a citrus, aquatic cologne that is suitable for men and women. The perfume house released this aquatic scent was released in 2007 by the perfume house, which means that it has over a decade of presence in the market.

Oliver and Erwin Creed expertly created Virgin Island Water. These perfumes have stated that the fragrance drew its inspiration from a sailing trip near Ginger Island in the Caribbean. At first, the scent gains everyone’s attention immediately. It opens up with a citrusy cocktail which after that translates into a smooth and comforting coconut combination.

Each fragrance tier was chosen to gain attention at different points during the day or early evening. Virgin Island Water is relatively long-lasting and has moderate sillage. It is a romantic fragrance most appropriate for summer days. Time to try this crowd pleaser for yourself! 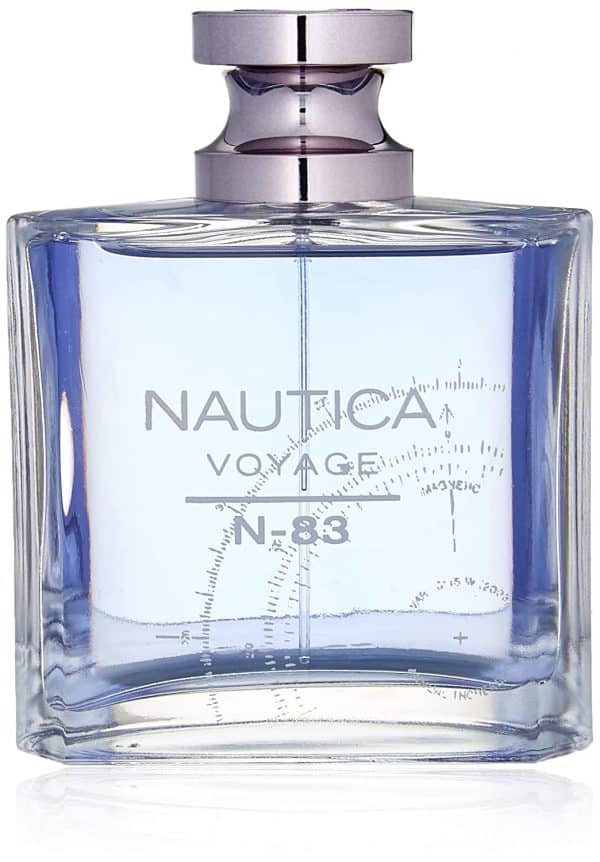 Voyage n-83 by Nautica EDT has been on the market since 2013, and since then, it has become increasingly popular. An oriental and aquatic fragrance, it has moderate longevity and sillage.

Voyage n-83 by Nautica has to be remembered as one of the best aqua cologne. When this cologne was formulated, nine key ingredients were used to harness their true potential. It may seem somewhat confusing trying to comprehend how these very different scents work together. However, they most certainly do!

Voyage n-83 aqua cologne is suitable to wear during the summer and spring seasons, and it is more than worth the occasional reapplication. Apart from completing almost any outfit, it was crafted to essentially take every person on a unique journey. Time to merge your journey with this one, don’t you think? 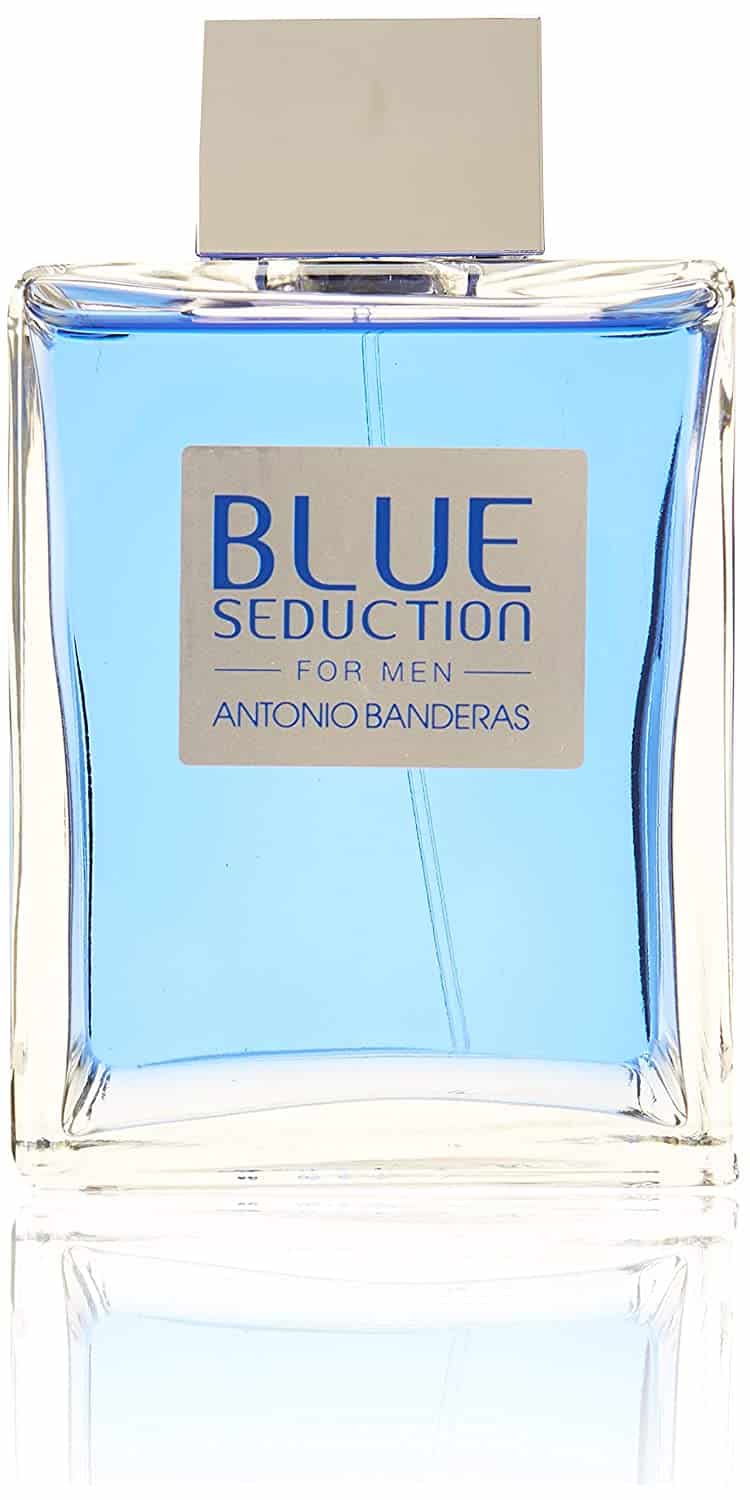 Antonio Banderas: a more than a well-known celebrity who moved towards having his very own signature fragrance in 2007. He has managed to encapsulate his heritage and culture within every single bottle. Antonio himself has stated that his true vision for the cologne was to reflect who he is as a person.

This outstanding fragrance gained popularity due to the name behind it, the substance that it possesses is one of the major selling factors. Blue Seduction consists of a blend of several distinct scents.

Blue Seduction is aimed mainly at the 25 to 35-year-old age group. It appeals to everybody due to its distinct nature and is sure to leave a long-lasting impact no matter the time of day.

Blue seduction expertly integrates touches of modernism and style that compliment almost every man’s masculinity. It is most suitable for late spring and summer days. 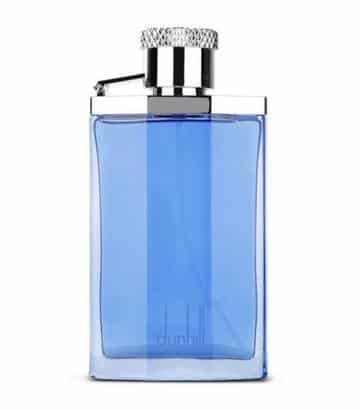 Alfred Dunhill Desire Blue EDT for Men is a remarkable contender in the fragrance world. It possesses the unique ability to integrate citrus blends and ocean scents to leave a fresh and aquatic scent that is very memorable.

The perfumer behind this fragrance is Philippe Romano. He stated that each scent element was chosen for this fragrance with specific intent and purpose. The contents of the Desire Blue EDT are further emphasized by the aqua cologne blue bottle in which it is placed. It also has a modern silver stopper that ties the fragrance essence together.

Dunhill Desire Blue has moderate longevity and sillage. Another aspect that makes this cologne a fan favorite is the fact that it is a very welcoming fragrance. It is typically referred to as a day fragrance that compliments the summer and spring seasons the most. Make your purchase and experience it for yourself! 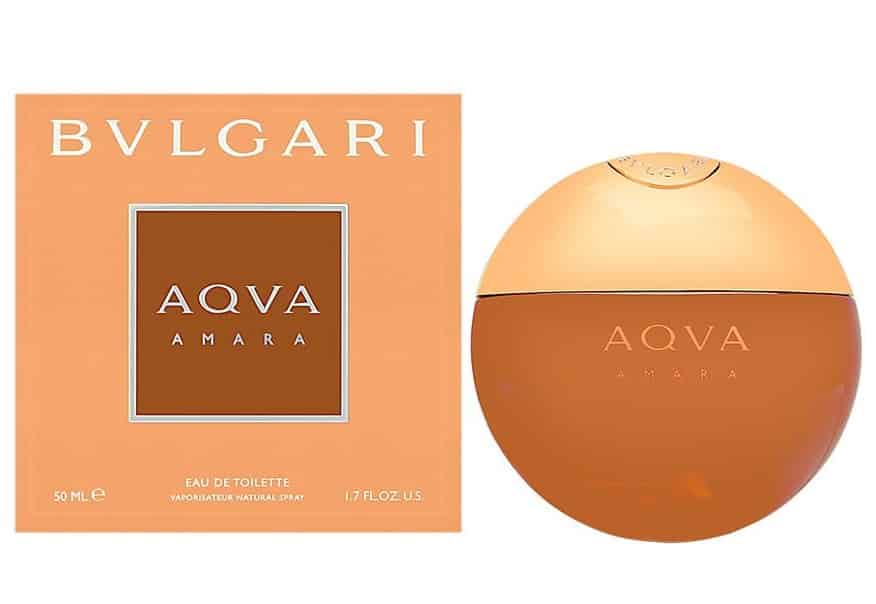 Bvlgari Aqva Amara EDT aims to make your choice of fragrance slightly simpler. This fresh aquatic cologne was launched in 2014. Amara EDT is a woody aquatic fragrance that is somewhat different from what everyone expects.

The perfumer behind this marvelous creation is Jacques Cavallier. He specifically included a minimal number of scent elements into the fragrance to highlight their individuality. Jacques aimed at making Aqva Amara a masculine fragrance with a twist. The name itself means bitter water, which makes it stand out that much more!

Amara is a fresh summer fragrance best suited to daytime wear. The copper bottle was chosen to accentuate the brightness and energy contained within every bottle. It is time to add this to your collection of aquatic colognes. 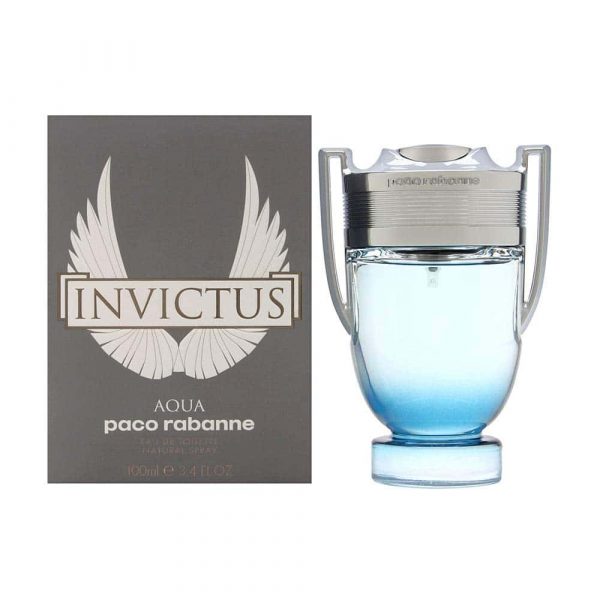 Paco Rabanne has been a big name in the fragrance industry for several years. With the release of Invictus Aqua by Paco Rabanne Eau de Toilette, the aim was to bring back the aquatic cologne trend. This cologne was launched in 2014 and followed the same trend as earlier released colognes. The same bottle design was utilized: the trophy shape in frosted glass. The overall design was initially inspired by competition, athletic spirit, and victory. This fresh aquatic cologne mainly appeals to the man who aims to rise above and beyond all others.

Invictus Aqua by Paco Rabanne initially opens up as a rather energetic scent engulfed with grapefruit. It moves towards more of a marine and herbal accord as time progresses, which is quite prominent. Marine notes are synonymous with aquatic fragrances. Eventually, the aroma further translates into a powerful and woody scent.

The fragrance is a daytime summer fragrance. Such a versatile cologne is fully adaptable to any situation. Try it for yourself today!

Aquatic Giorgio Armani Acqua Di Gio is one of the popular Armani fragrances that are currently on the market. This scent has been in existence for over two decades. The inspiration for this fragrance was the beauty of Pantellerie, where Armani spent his vacations.

One of the best aquatic colognes, Armani's fragrance, is the scent of freedom, wind, and water. Just as every person has their own unique story, so does this cologne. It manages to instantly transport you to the ocean with sweet and sea salt notes of ocean water that link directly with the feeling of the sun beating down on your skin.

With so many scents blended, one may assume that they get lost among each other. This is not the case, and every scent element comes through distinctly as the fragrance is worn. The cologne is a daytime fragrance for summer and spring. 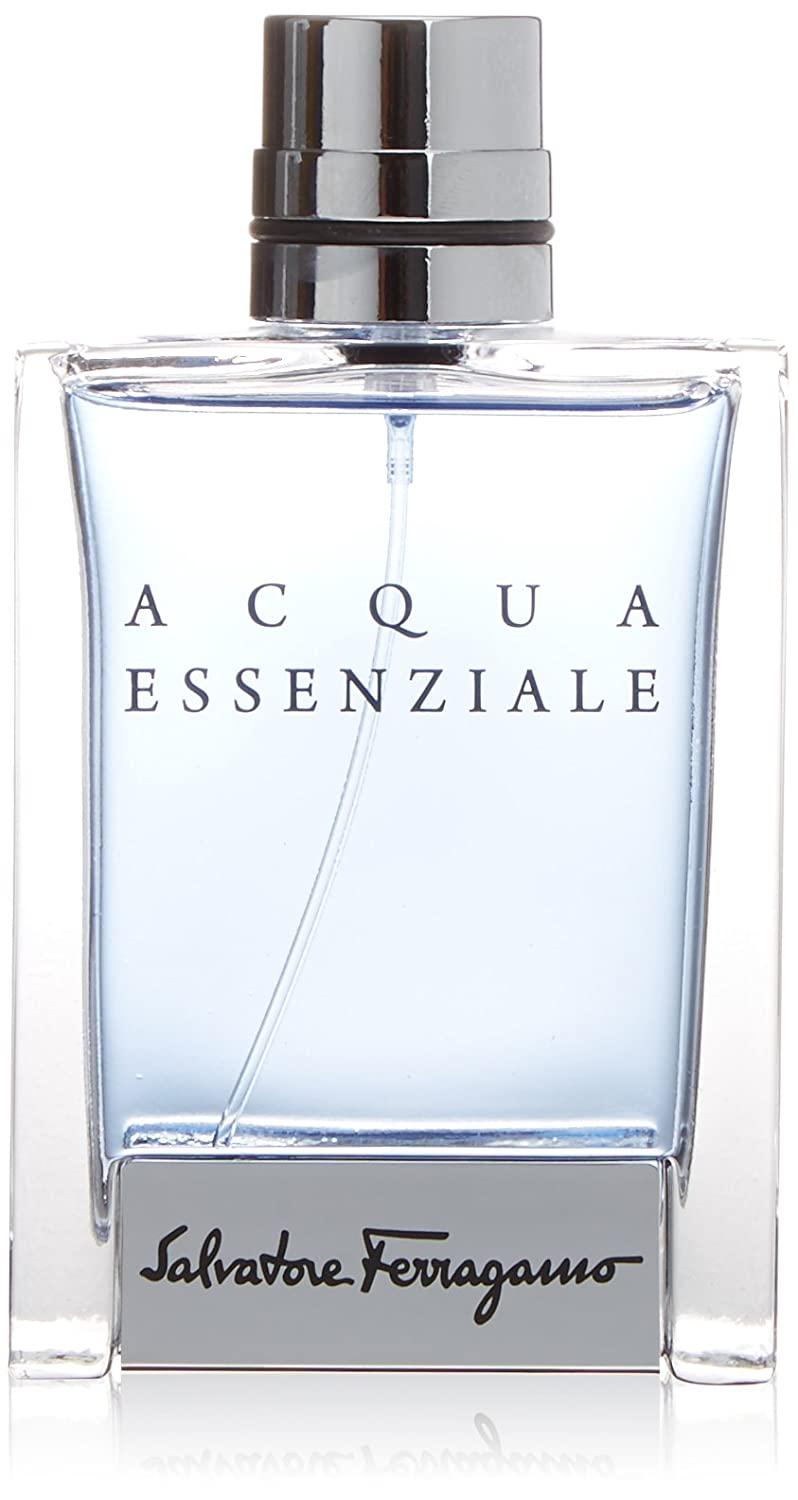 The Salvatore Ferragamo Acqua Essenziale EDT. The name itself gives off a continental air like no other, and this fragrance will be sure to capture the attention of every passer-by. This aromatic Fougere fragrance for men was launched in 2013 and made quite a memorable entrance into the perfume market.

Each scent note manages to shine through as the cologne matures throughout the duration in which it is worn. However, the heart notes are the main stars, make the most substantial impact, and are dominant overall. Salvatore Ferragamo Acqua Essenziale EDT has moderate longevity and sillage.

This cologne is most suited to be worn during the day and the spring and summer seasons. This is due to its extreme and very distinct ocean freshness. 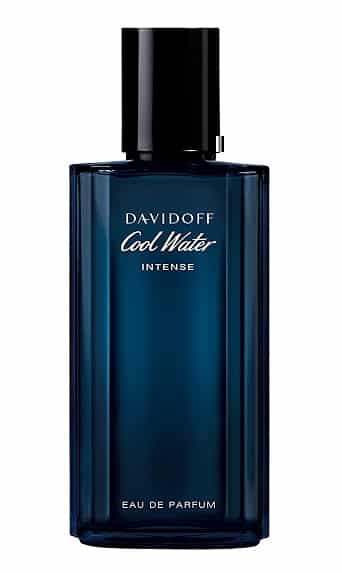 Davidoff’s Cool Water is the embodiment of marine fragrances. This scent paints a picture of its own and manages to take you on a journey to the ocean. With every passing moment, each scent element becomes that much more distinct than the last.

This scent was first launched in 2019, but it has rapidly gained popularity in the short time it has been around. The perfumer behind this fragrance is Annick Menardo, who focused on blending less than a handful of scent elements.

The Davidoff Cool Water Intense Eau De Parfume comprises only three scent elements. This incredibly simplistic blend aims at emphasizing being able to harness the individuality of each scent. This very different blend of scents appeals to many people seeing as it evokes thoughts of the beach and tropical nights.

This fragrance is very long-lasting and has a powerful sillage. It can be worn during warmer fall days but is best suited to spring and summer. Cool Water Intense is also suitable for warm evenings. Should you wish to add it to your Aquatic fragrance collection or gift it to another there will be no disappointment at all!

As you will have noticed, there is a vast range of aquatic colognes on the market. From Versace to Bvlgari the amount of luxury just keeps on increasing. As previously mentioned, aquatic fragrances have made an increasingly big comeback in recent years. Almost every fragrance house has put its spin on what is referred to as the “common” aquatic fragrance.

Infusions of woody aquatic and oriental notes within the best aquatic colognes have become the new norm, and people simply can’t get enough! If you are searching for a new cologne to complete your collection or looking for the perfect gift, stop your search right here. Have a look at the article above and make your selection from the 10 best aquatic fragrances for him. We should mention other well-known aquatic colones like Polo Blue EDT, Eternity Aqua of Calvin Klein, Nautica Voyage by Nautica, and Dolce & Gabbana Light Blue.