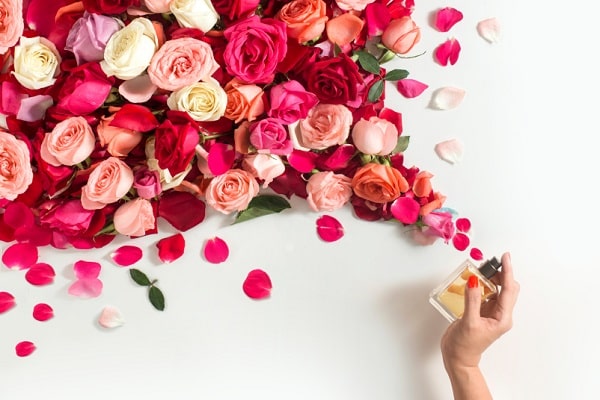 “A great perfume is a work of art, it can lift our days, haunt our nights and create the milestones of our memories. Fragrance is liquid emotion. And that never goes out of fashion.”
- Michael Edwards: The Perfume Expert’s Expert

Shopping for perfume can be overwhelming if you don’t know what you are looking for. Here we aim to guide you through the process by giving you a clearer understanding of perfume so that you can make the best possible choice. We discuss perfume notes, perfume concentration, and fragrance families. Lastly, we list common perfumery terms to further demystify the subject.

Perfume has the power to arouse reminiscences, moods and emotions in a way that our other senses cannot. Receiving a compliment on how marvelous you smell is a feeling that takes some beating.

Each perfume comprises of layers of scents to form its distinctive bouquet. You can visualize these layers as a fragrance pyramid (as shown above). The layers are called fragrance notes. A fragrance is made up of three types of scents in different proportions: firstly the top notes (30%), then the middle notes (50%), and lastly the base notes (20%).

Top notes (also called head notes) are what you smell first, and they fade faster given their light molecular structure. They give the first impression of the perfume blend. It is crucial that the top notes entice you, but also effortlessly evolve into the heart of the fragrance. The scents of the oils in this note will tend to be light, fresh, and uplifting. Common fragrance top notes include citrus (lemon, orange zest, bergamot), light fruits (grapefruit, berries) and herbs (clary sage, lavender).

Middle notes (also referred to as heart notes) surface as the top notes dissipate and these are considered the core of your fragrance. These oils will give the full body to the perfume blend and have a strong effect on the base notes. Not quite as volatile as the top notes, middle notes will take a little longer to surface (typically 20-60 minutes after application). Generally these will be warm and comforting scents. Common fragrance middle notes include geranium, rose, lemongrass, ylang-ylang, lavender, coriander, nutmeg, neroli and jasmine.

Base notes are what help the middle notes last longer; they accentuate and extend the longevity of the middle notes. They will be noticeable for quite a while and they also slow down the evaporation of the oils from the top two notes. These notes provide complexity and support the middle notes. This is the most prominent part of any fragrance. Base notes will generally be very rich and can also be relaxing in nature. Common fragrance base notes include cedarwood, sandalwood, vanilla, amber, patchouli, oakmoss and musk.

Perfume concentration refers to the strength of a fragrance, or more specifically, to how much high grade alcohol and/or water has been added to the fragrance oils.

Parfum has the largest fragrance concentration. The longest lasting of all scents, a parfum usually lasts between 6 to 8 hours. Parfum generally also commands the highest price. It contains less alcohol which is better for sensitive skin.

If you love a fragrance, try the parfum as it is usually the most opulent and multifaceted version.

This is the typical dilution level for fragrances, with between 15 and 20 percent oil. Eau de Parfum tends to be the most conspicuous to those around you. This makes them great for date nights. They are however no good for long periods of time spent in the heat, as this tends to make them smell stronger.

On average, Eau de Parfum will last for 4 to 5 hours and being less expensive it is one of the most prevalent and also the most appropriate for everyday wear.

These are your go-tos for day-to-day or warmer weather. They usually deliver a daintier, less complicated scent. Often positioned as second-rate to EDPs, that is actually not the case. They each have their own purpose, with EDT often being a great entry level choice.

EDT is less expensive than EDP and is one of the most popular fragrance types. It will last between 2 to 3 hours. The term eau de toilette derives from the French term "faire sa toilette" which means getting ready. It is most often applied to the skin after bathing or shaving.

Concentration of perfume oils: 2% to 4%

Eau de Cologne has a much lower concentration of fragrance and is therefore cheaper. This scent has a lasting power of only around two hours. EDC is often presented in bigger bottles as more of the fragrance is necessary for use. Originally it referred to a traditional recipe using herb and citrus notes.

If you are looking for something fresh and light then EDC is a great choice. The beauty of EDC lies in its minimalism.

Concentration of perfume oils: 1% to 3%

Eau de Fraiche has a lower price due to the low percentage of essential oils it contains. It does not however contain a larger amount of alcohol with the extra ingredient most often being water. The term, "eau fraiche" translates to fresh water. It is comparable to EDC in that the scent generally lasts for up to two hours.

Considered the beer shandy of the fragrance world, it is very popular among those who cannot afford the sometimes exorbitant cost of parfum.

Aftershave is a liquid product containing an antiseptic agent to prevent the infection of cuts, as well as ease skin irritation. Some aftershaves make use of fragrance or essential oils to enrich the scent.

Marketed to men, aftershave products reduce the number of steps in a skincare routine, and forms part of a ritual for many people. They are made to be applied all over as well as repeatedly, making them perfect for the outdoors or the gym.

The next phase to making the perfect perfume choice is to understand the different fragrance families on which each perfume is based. 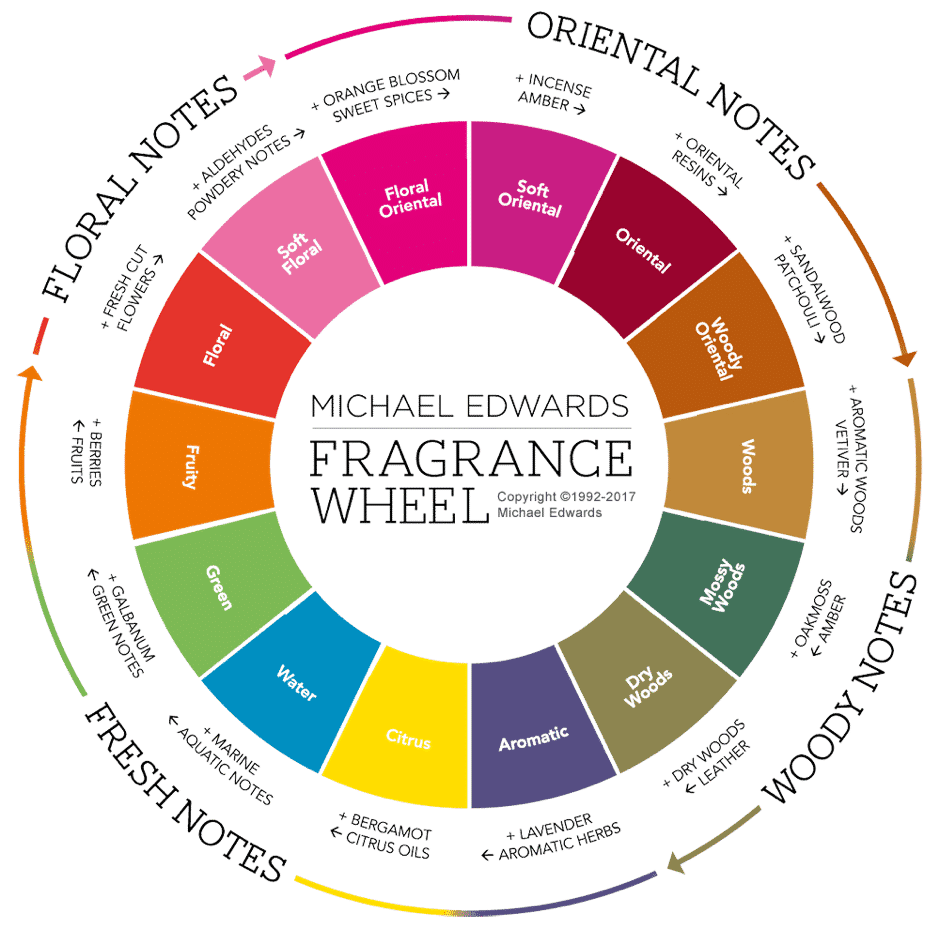 Undoubtedly the most popular choice and the broadest, floral fragrance notes comprise of the scent of one or many flower varieties. Floral scents are romantic. They are flirty and girlish and range in concentration from being light and delicate, to more complex and intense. Floral fragrances often contain notes such as roses, jasmine, lilies and peonies. Think of perfumes with gardenia notes. Men’s floral colognes usually use orange blossom, giving them a charming quality.

Oriental fragrance notes are warm, sweet and spicier with suggestions of vanilla, cardamom, cinnamon and clove alongside the likes of jasmine, orchid and orange blossom. Originating from mysterious parts of the world and made from spices, this is a more luxurious fragrance family. Oriental fragrances range from floral oriental to soft oriental and woody oriental.

Preferred by men, these scents often have light top notes with spicier base notes of wood-based smells like cedarwood, sandalwood note, vetiver or amber, providing an air of sophistication and enigma to those wearing them. Women favor the woody notes for evenings. Woody scents can be mossy with an earthy, sweet undertone, or dry - often with a smoky, leathery smell to them.

Fresh fragrance notes are usually made up of citrus, water or green notes. This means they have refreshing, zesty and vibrant smells. Citrus-based fragrances are usually created with lemon, mandarin and bergamot. Water fragrances are made with aquatic notes like sea spray. Fresh green fragrances are often reminiscent of herbal and leafy scents and have a crisp, uplifting smell. They can sometimes be paired with notes of lavender, rosemary or basil.